Example: The device shown here counts `smile’s`.  The actual count value is `1 0` How many smile´s you have indeed? 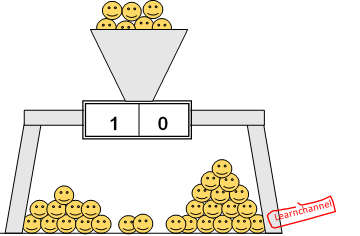 Characteristics of a number systems

All the number systems used today in have the following in common:

The decimal system has the following characteristics:

The example shows that a binary number has greater number of digits than the corresponding decimal number. With 8 digits, binary numbers can be represented values up to 255, with 16 digits up to 65 535.

The Hexadecimal system has the number 16 for its base. As mentioned before, the base determines the number of single digits of the character set - here we have the digits 0 through 9 and the letters A to F.

The hexadecimal system is used to represent with as few digits and characters large numbers. In addition, a conversion of a binary number to hexadecimal number and vice versa is very simple.

When we compare the binary coded number ‘1100 1101’ with the number in hex ‘CD’, we recognize, that always 4 binary digits build a hex digit. The reason is that with 4 binary numbers exactly 16 numbers can be displayed (from 0 to F).

The BCD-code converts each digit of a decimal numbers into a binary number and therefore is not another number system. The BCD code is required primarily for inputs and outputs. 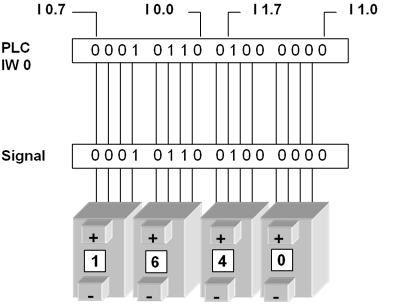 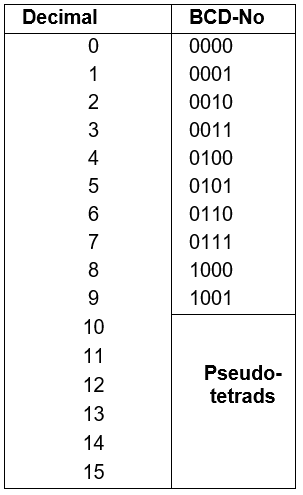 Binary coded Decimal (BCD) - how it is built

This presentation is called Binary Coded Decimal or abbreviated BCD code. The individual digits are encrypted with four binary digits (bits). The representation with 4 bits results from the fact that the most significant decimal digit (910) requires in the binary representation at least 4 digits (1001).

For the presentation of the ten decimal digits 0 through 9 in BCD code the same representation is used as for binary numbers from 0 ... 9.

6 Of the 16 possible combinations with four binary digits the last 6 combination remain unused. We call these combinations "forbidden” and call them pseudo tetrads.