What is a PLC?

PLC stands for “Programmable Logic Control”. It is an industrial grade computer designed to control manufacturing processes. Nowadays you find them in nearly every assembly line, but also more and more in the  building services system.

A modular PLC consists of several modules and can be therefore individually adapted to the desired application. The assemblies are mounted on a profile rail (rack) according to fixed rules.
The power supply module is placed on the left, followed by the CPU and the input and output cards. Depending on the application, further modules such as communication panels or motor control are arranged on the right. The mounting locations, i.e. slots, are numbered from left to right in increasing order.

PLC Programable Logic Control - Structure, how it is built

The Power Supply module generates an operating voltage of 24 V for the PLC from the mains voltages 115V or 230V AC. It can also performs monitoring and signalling functions.

The CPU represents the central module which executes the user program. It reads the signal states of the input module, executes the logic operations of the user program and controls the outputs. The operating system that controls these operations is stored in the Read-Only memory. The user-program, as well as current counters and time values, are stored in the RAM (volatile memory) if not stored on a "Memory Card". 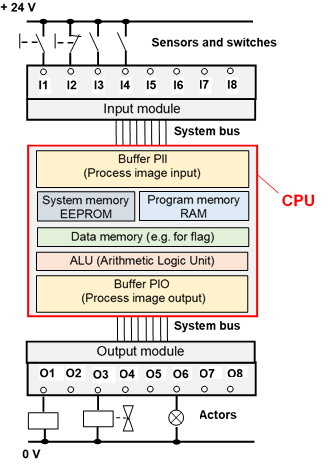 PLC - How it works

Signal modules SM form the interfaces between the CPU and the "outside world". To protect the CPU against voltage peaks and short circuits, the input and output modules are galvanically isolated via optocouplers.

The data transfer between CPU and signal modules takes place via a system bus (classified as parallel), which is located at the rear of the PLC.

For special requirements the PLC can be extended with special modules, which fulfill time-critical and computation-intensive tasks. Examples would be communication processor, modules for controlling drives, etc.

PLC have their origin in the late 1960’s in the US-automotive industry and were designed to replace the relay logic systems. Allen Bradly is here to mentioned in the first place.