As predecessor of the stepper motor, the so-called "pawl drive" can be considered. The principle is simple: a coil rotates the rotor, when energized, for a certain angle as if it were a ratchet. This drive was already used in 1850 in telegraphy in the context of the "pointer telegraph".

The stepper motor is an advancement, that was used in the 1930s by the British Navy for the control of turrets and cannons.

Who was the actual inventor of the stepper motor?

This can be argued. For most, however, it is Frank W. Woods who has filed a patent for a stepper motor with 5 stator coils. By controlling the polarity of the stator coils, a step movement already could be generated. It was also possible to reverse the direction of rotation. 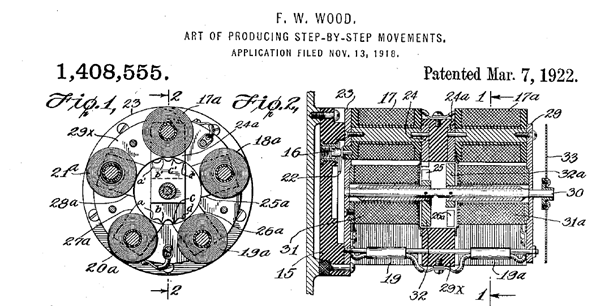 In these days he rotor was mostly of a permanent magnetic material. For the reluctance principle there was already in the 20s a comprehensive protection right. The hybrid engine developed in the 60s was a further development from the reluctance and permanent stepper.

With advances in electronics, controllers for these drives have become more powerful and cheaper, making the stepper motor widely used in the industry from about the 2000s.