History of this measuring bridge

The so-called measuring bridge has its origins in 1833. At this time, Samuel Hunter Christie (born March 22, 1784 in London; † January 24, 1865), British mathematician and scientist, described the basic principle of the Wheatstone Bridge in a script for the "University of Cambridge". It was also him who proved in 1833 that the conductivity of various metals decreases with increasing length and improved with increasing wire diameter.

Function of this measuring bridge:

Why not simply an evaluation via e.g. series connection NTC with resistor?

The advantages of a bridge circuit are as follows:

A measuring bridge is considered to be calibrated, that means at balance, when the bridge voltage UBR = 0 V. This is the case when the resistors R1 and R2 are in the same ratio to R3 and R4:

Calculate the bridge voltage in the unbalanced state:

Regarding the two loops, there are two possibilities to calculate it:

Voltage drops at individual resistors can be calculated, for example, using the voltage divider formula:

Work order: Calculation of the bridge circuit with NTC thermistor

a) The following measuring bridge should be calibrated at 0 ° C. Calculate what value the resistor R3 needs to be set to.

b) At 100 ° C the measuring voltage should be 10 V. Determine the amplification factor V of the amplifier. 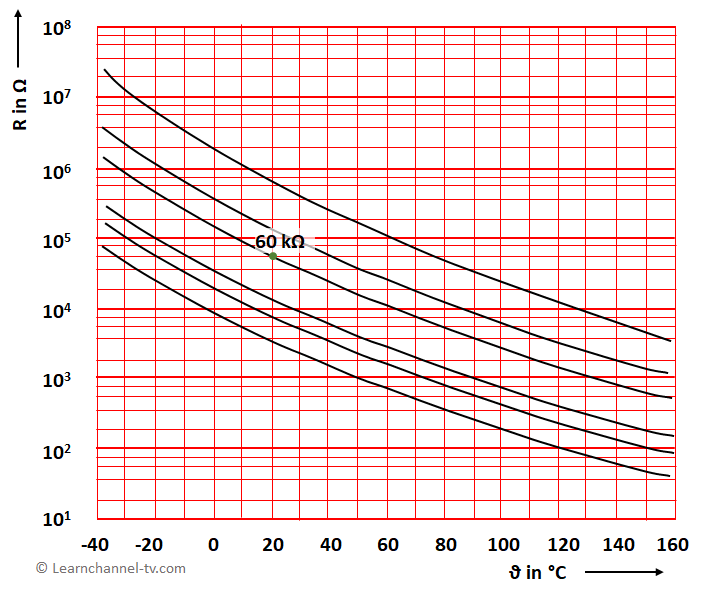