The choice of a directional control valve depends on e.g.  which cylinder you are using, which actuation is to be implemented, whether this valve is to be actuated directly or indirectly.But for all valves aplies: the naming depends on the number of connections and switch positions.

Connecting way-valves: The names of the connections, which are standardized, you get in the following table:

- Normal closed valve (NC) that does not allow airflow in itsnormal position.

- Normal open valve (NO) that allows airflow in its normal position. 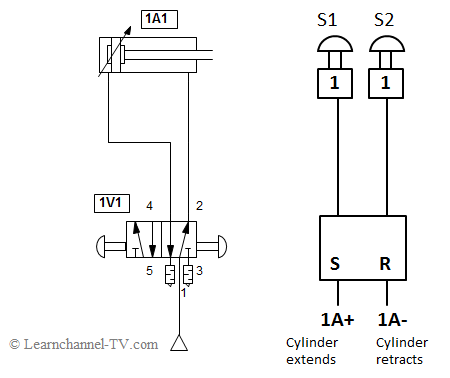 Pulse-way valves which remain their position: You can classify directional control valves according to their characteristics. Spring return valves jump immediately after being activated back to their initial position. Pulse valves on the other hand keep the momentary switch position after being activated. This property can be illustrated clearly by logic diagram:

Name the way valve with the symbol aside!

Find the correct naming and symbol for this way valve!