Proportional directional valves control the direction as well as the speed of the actuator via the volume flow. The stepless switching of an actor like a piston can be performed by controlling a proportional solenoid on both sides or - as shown here - on one sides.

To increase the positional accuracy and to reduce the friction losses of the switching piston, a weak alternating current signal, referred to here as a dither signal, is superimposed on the direct current signal.

Since continuous valves have an analog signal as input and output signals, the switching is described by characteristic curves.

The flow rate depends on the cylinder position as illustrated. Also it would be possible to describe control signal (control current or control voltage) as x-axis. 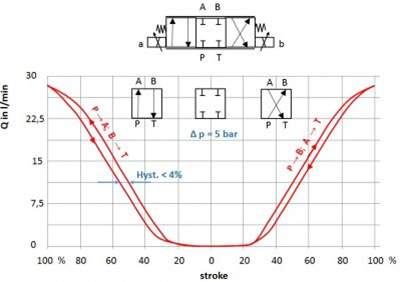 The difference between rising and falling curves is defined as hysteresis. A hysteresis which is as small as possible favors a high positioning accuracy.

fig.:flow control rate of a 4/3-way valve with all parts blocked in the center position 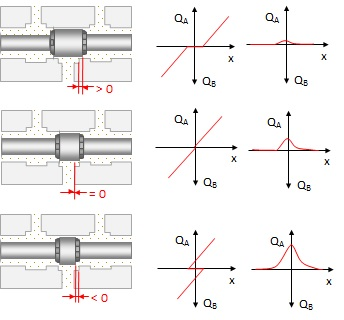 A positive overlap leads to a dead zone in the transition to the other flow area. Electronically, this dead zone can be compensated by a jumping starting signal. The setpoint thus skips the dead zone and begins with the corrected setpoint by opening the flow.