A controlled system without delay exists when the controlled variable follows the manipulated variable without a measurable time delay and thus suddenly reaches its steady state. In practice, there is practically no pure P-system. Even a transistor has a delay. However, for simplicity, if the time delay is very small or barely measurable, then the reaction can be idealized.

The behavior of a single storage element system (1st order system) can be described by an exponential function:

The time constant T is a measure for how fast the steady-state condition can be reached. Graphically it can be determined using the slope tangent at the starting point. This tangent cuts the straight line of the maximum value. Now draw a straight line vertically to the time axis.

The time constant is the time that the controlled value x needs to reach 63,2% of the final value (maximum, steady-state). Practically, the steady-state is reached after about 5T.

If a controlled system has severstep response and symbol PTn-systemal stages which store energy, then you call it a PTn - system. Here you see an example: A tin bath (PT2-system) consisiting of 2 separate elements: the heating resistors and the tin itself - both elements store energy in form of heat.

How to determine the parameter via the step-response you see here: 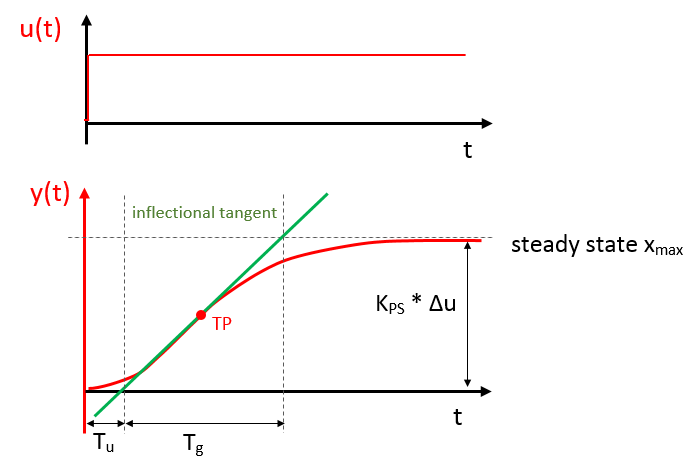